St. Padre Pio the Flying Saints and the American Comrades

St. Padre Pio the Flying Saints and the American Comrades 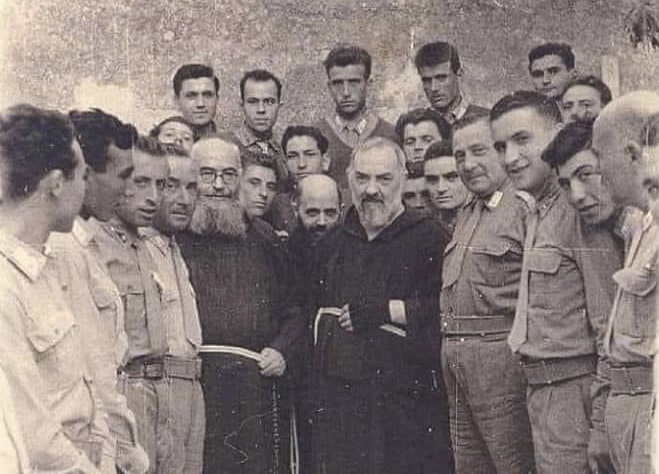 “In the photo Padre Pio and the North American Protestant pilots who converted to Catholicism after seeing the Saint flying with his planes.”

The testimony of a general who was converted: in the region of San Giovanni Rotondo, where the saint lived, a bomb never fell

This extraordinary story about Padre Pio is told by Fr. Damaso di Sant’Elia, superior of the Pianisi convent, in Italy. The report appears formally in “Positio”, the official document that exposes the defense of the canonization of the famous Capuchin friar, who was awarded the stigmata of the Passion of Christ.

“Several pilots of British and American aviation, of various nationalities and different religions, who, during the Second World War, after September 8, 1943, were in the area of ​​Bari to carry out missions in Italian territory, were witnesses of a unusual fact. In carrying out their duties, some airmen passed through the Gargano region, near San Giovanni Rotondo, and saw a ‘monk’ in the sky who was forbidden to drop bombs on the spot.

In Foggia and Apúlia almost all there were bombings on several occasions, but, incredibly, in the area of ​​San Giovanni Rotondo (where Padre Pio lived) a bomb never fell. Direct witness of this fact was the general of the Italian air force, Bernardo Rossini, who, at the time, was part of the Air Unit Command together with the allied forces.

General Rossini told me that, among the military, there was talk of a ‘monk’ who appeared in the sky and made the planes withdraw. Many laughed in disbelief at these stories, but, due to the repeated occurrence of the episodes, and always with different pilots, the general decided to intervene personally: he took command of a squadron of bombers to destroy a German ammunition depot that was right in San Giovanni Rotondo.

We were all extremely curious to know the result of the operation. Therefore, when the flight returned, we immediately went to find the general, who, astonished, said that, as soon as he arrived at the site, both he and his pilots saw the ‘monk’ figure in the sky with their hands raised; the bombs dropped by themselves and fell in a forest; and the planes came around without any pilot intervention.

Everyone wondered who was that ‘ghost’ that the planes obeyed. Upon hearing that in San Giovanni Rotondo there was a friar with stigmas, considered holy by the community, the general thought that perhaps he was the ‘monk’ seen in heaven and decided to check it out as soon as possible. When the war was over, this was the first thing he did. Accompanied by some pilots, he went to the Capuchin convent and, crossing the threshold of the sacristy, found himself facing several friars, among whom he immediately recognized the one who had stopped his planes.

Supporting charitable and humanitarian initiatives across the globe.

Follow Us
GET INVOLVED
WAYS TO DONATE
To Donate By Check:
Copyright 2021. The Catholic Connect Foundation - All rights reserved.